We’ve a choice of 3 Touchless Taps from leading brassware brand hansgrohe currently on offer with a massive 50% saving on RRP. 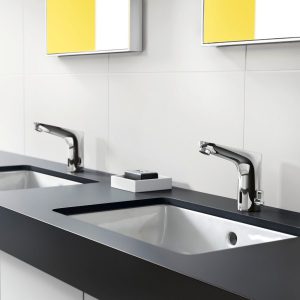 As well as being a sleek additional to any bathroom these taps are ideal in workplaces and public areas thanks to their ‘no-touch’ operation.

These touchless wonders are packed with brilliant technology including features such as hygiene wash option, infrared sensors and water stop for when you need to clean the sink.

When you consider the amount times that a toilet used during its life, it is remarkable that it continues to function without having more breakdowns. Much of this can be attributed to good engineering and quality manufacture, but like any piece of apparatus, it should from time to time have some simple maintenance and we believe a little TLC! However, it’s usually not difficult or expensive to repair a toilet in the event that it is not working the way it used to and there are some ways in which things can go wrong.

Perhaps one of the most common problems that could occur with a toilet is that it becomes blocked. Now in the normal usage this should never happen, but it does and usually it can occur at the most inconvenient moment! Of course most blockages can be cleared yourself without having to pay a plumber. Follow these steps, and you should have the problem cleared up in no time.

Firstly it is a good idea to put on some rubber gloves and if you can see the problem, a child’s toy or similar, just remove it. If this is not the case put some papers on the floor and if the water is not too high in the bowl, try one more flush, the weight of water can often be enough to clear the blockage, if this fails then the best way and usually always effective is to use a plunger.

Make sure you’re covering the hole completely. The plunger should be submerged in water to be effective. It is important to be pushing and pulling with water, not air, if necessary add a small amount of water to the bowl. This works by causing a suction which should, by constantly disturbing the blockage in both directions that will gradually cause it to be loosened. Stubborn blockages might require you to do this a number of times.

Another problem can be a dripping toilet, not causing any problems except wasting a lot of water and keeping you awake all night! Two things can happen here, if you have an old toilet it will have an overflow pipe that allows the water to run out onto garden or driveway. Modern toilets work in a slightly different way by having the overflow running into the bowl Take the lid off the cistern and lift the ball arm, if this stops the leak, you have either a faulty valve or the arm is sticking. If the valve is faulty this may just be a worn washer and replacing will solve the problem. Turn off the water and expose the valve by removing the cover close to where the ball arm fits, this will allow the washer to be removed and replaced. Often simply turning the washer over can work. However if it is the arm that is sticking a little grease at the joint will free it.

If your toilet cistern is not flushing properly, there could be a number of reasons for this and the first thing to do is to check the level of the water in the cistern or tank. It should always be just at or below the line which you will find marked at the back of the cistern on the inside. If it is below this the ball arm will have to be adjusted, Modern toilet cisterns have a small adjusting screw where the arm meets the valve and turning this anticlockwise allows the arm to rise a little higher in the tank.

If the flushing system itself is at fault and if there is plenty of water in the tank and it does not completely empty when flushed means that the syphonic valve is faulty and will have to be replaced. This is far simpler than it may look and new modern ones will fit into most toilet cisterns. But fixing the old one can perhaps just mean that the plastic valve which allows the water in the cistern to flow through the siphon trap into the pan has become old, cracked or worn out. This can be replaced by first draining the cistern of all water by flushing, then mopping any water left with old towels. Disconnect the flushing arm inside the cistern with a suitable spanner or grips unscrew the large nut holding the flush pipe onto the base of the cistern and unscrew the retaining nut which holds the siphon to the base of the cistern. Lift out the assembly completely and take off the plastic valve off he metal plate and replace this with an identical one. Reassemble the items in reverse order and refill the cistern, checking the area around the pipe for leaks. You should now have a good flushing system again.

To accompany the release of Villeroy & Boch’s brand new bathroom range called Joyce, the premier bathroom manufacturer has created an augmented reality app so that you can experience the products in your own home in full interactive 3D.

Embracing the new technology we decided to give it a try and write an in-depth review of the app. The V&B Joyce Augmented App is available on both the AppStore and Google Play, and for this review we will be trying the app out on the iPad Mini.

Downloading the app is easy, simply search for V&B Augmented App and click install; the app will download and be ready to use. Next you will have to print out the AR marker from here on the Villeroy & Boch website and attach it to any wall with blue tack or tape.

Once the A marker is in place open the app and aim the devices camera at the marker, it takes a couple of seconds to recognise the marker then it displays a 3D bathroom product right on the screen.

You can choose which bathroom product to display from the Joyce range including 6 sinks, 6 vanity units, 4 cabinets, 3 toilets, 2 bidets and a whole range of bathroom accessories. This app is great for those who want to see what a particular product looks like in real life and pushes bathroom design into the future. 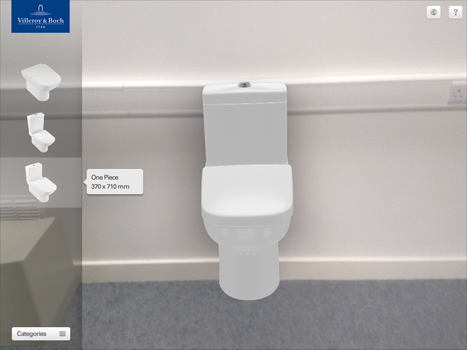 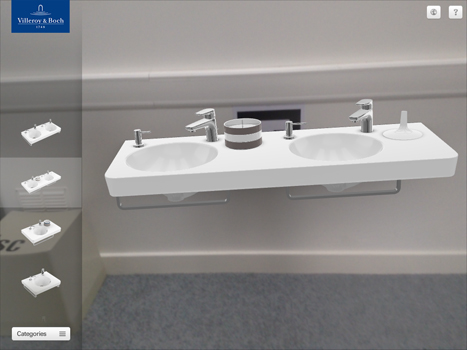 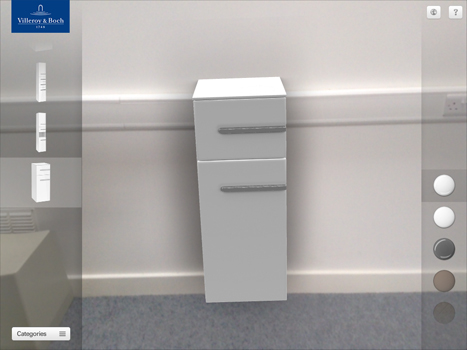