Creating a unique space in a small bathroom can be tricky, whether a simple guest toilet under the stairs or a small en-suite. Houzz have featured a great UK Bathrooms design on their 8 Clever and Creative Ways with Small Bathrooms feature. They look at a number of unique bathroom designs all fitting into small spaces, showing how a little creativity can really brighten up even the smallest bathroom.

Simple updates such as bold wall covering such as the design from UK Bathrooms to unique fixtures and fittings can have a great effect. The fixtures and fittings featured are from Burlington which can be found on our site and as you can see fit perfectly into an under stairs toilet whilst having an impact in the small space.

Being creative with your space, enables you to get the most out of your room, no matter what the size. Not many people would consider putting a toilet in their under stairs cupboard, but they can be more spacious than you realise and with well-designed toilets and sinks you can easily add a guest WC.

It's Great British Bake Off Time in the UK Bathrooms Office!

Here in the UK Bathrooms office we have all been getting into baking in preparation for the return of The Great British Bake Off (GBBO). We had a mini cake baking completion between staff, with a final winner. Stakes were high and the competition reached fever pitch as we all took to the kitchens each weekend to create our best cake.

The cakes were judged by Dave Laugher (Product Development Manager and Dad of UK B sponsored Olympian Diver Jack Laugher) who definitely had his fill of delicious cakes. Although there was no prize for the winner (and no fame either like the TV show) being known as the cake Queen or King in the office was enough for us. 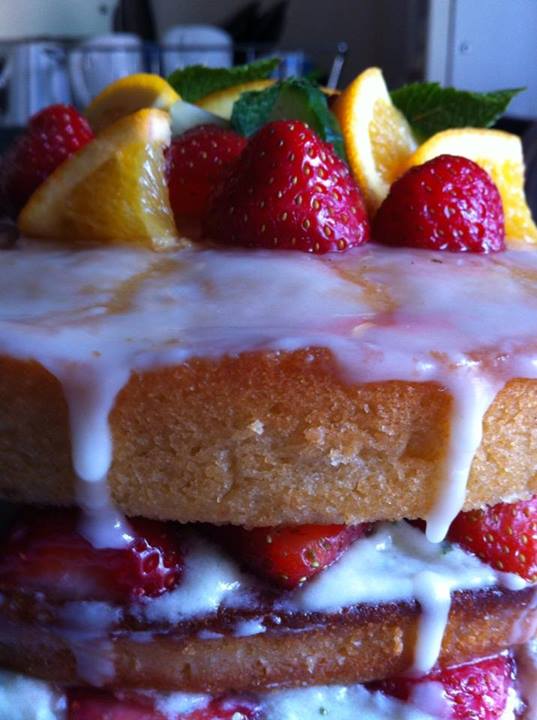 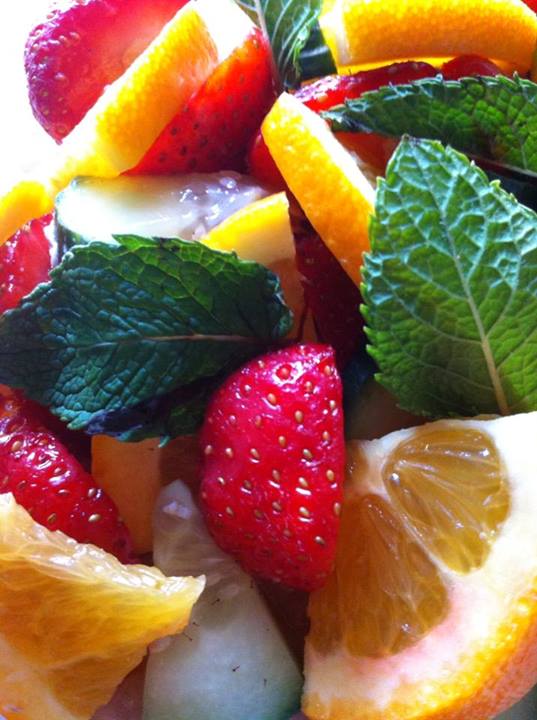 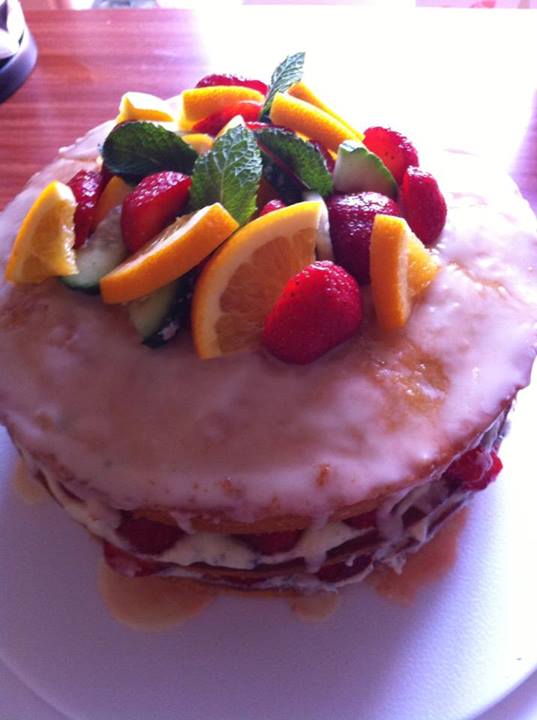 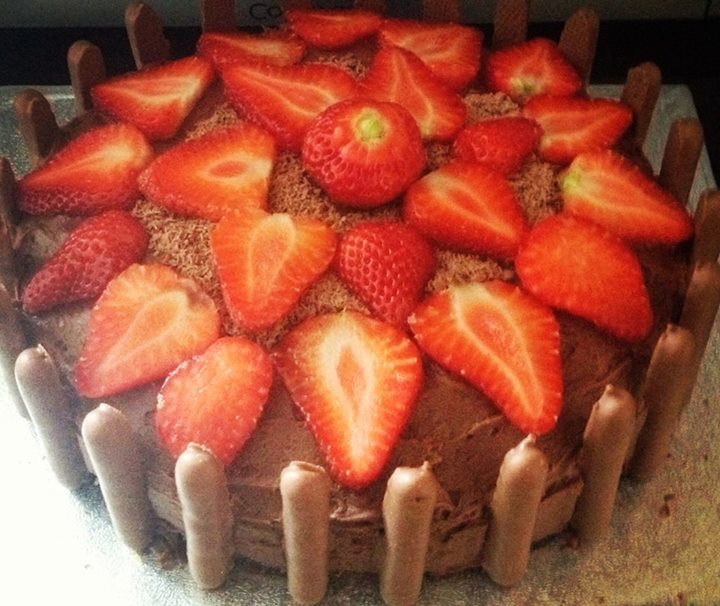 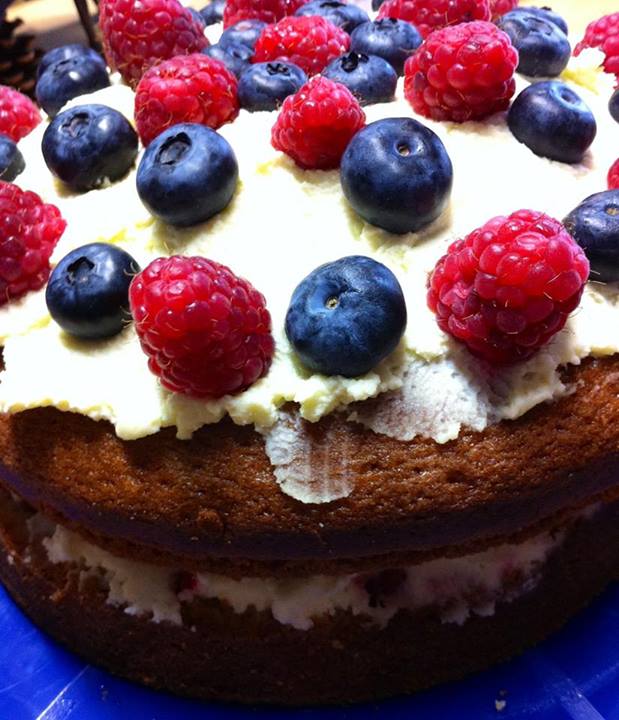 Amy’s Pims Cake stole the show with its delicious cucumber icing and soft moist cake. It scored highly for originality and summery-ness! A special mention also goes to Declan, our new office admin apprentice who got kudos for his efforts as he’s only 16 and did really well.

We are all huge fans of the GBBO which starts tonight and will be watching with bated breath to see if any cakes on the show match our fabulous creations. Keep up with us as we follow the show with #GBBO on Twitter!

And the rest of the entries…… 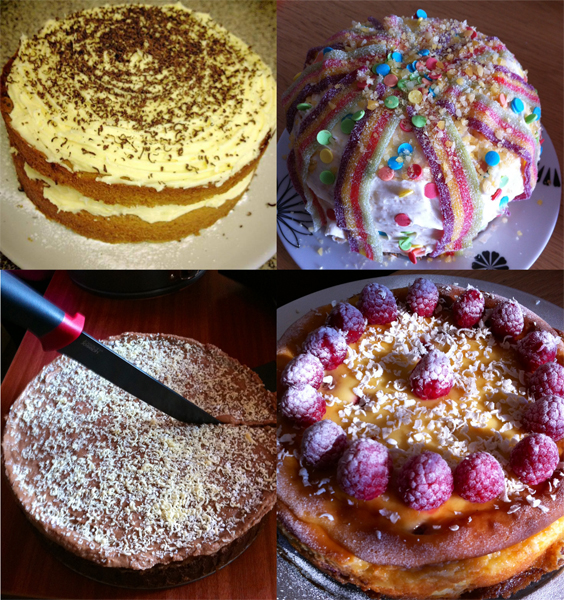 For many years women have been lauded about the amount of time they spend in the bathroom, busy with their beauty regimes, but it seems men are probably just as bad as women with their secret bathroom habits which have been revealed by bathroom retailer www.UKBathrooms.com. The research asked 1,367 UK males about what else they get up to in the bathroom. 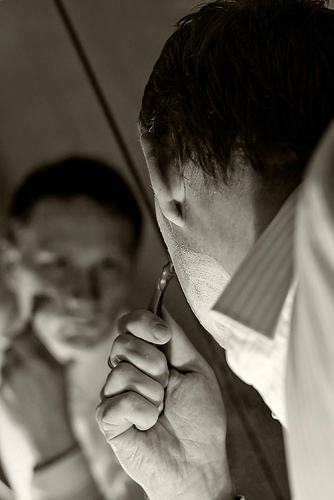 The men asked, chose from a list what grooming activities applied to them, the top 10 most popular are:

They were also asked what grooming they undertook on a daily basis and the results showed:

Women have long known that men partake in male grooming when alone in the bathroom, mainly because women’s beauty products seem to mysteriously run out quickly and their razors, wax strips and other personal hygiene items also run out quicker.

The men surveyed were asked why they followed a certain grooming pattern with 74% stating that they wanted to ‘look better’. Expanding on that result, 36% were compelled to ‘look better’ because of by ‘peer pressure’ whilst 22% blamed ‘celebrity culture’ for them taking an interest in their appearance.

Talking about the interesting findings of mens bathroom habits, Peter Gregg, Director of UKBathrooms.com, had the following to say:

“The rise of the metrosexual man shows no signs of slowing. Gone are the days of the grizzled construction worker, with dirt under his nails and a thick mane of hair on his back. Now it’s all about tanned, hairless skin with a shining, healthy head of hair. Or so our survey suggests at least!”

“With celebrities like David Beckham paving the way, men are feeling the pressure to fit the mould more and more. It’s often remarked that women feel compelled to strive to look like supermodels, but that pressure also applies to males. Television shows such as Geordie Shore and TOWIE only serve to reinforce the idea that men need to be perfectly groomed to get by in life.”

Add a touch of style to your bathroom with Ceramic tiles

The choice of ceramic tiles has never been better and with so many new manufacturers in continental Europe now distributing their products here in the UK, the range is wider than ever. At UK Bathrooms with offerings from Imperial bathrooms, Villeroy and Bosch, and Porcelanosa, you will find a huge range of ceramic bathroom or kitchen wall and floor tiles to suit even the most discerning of taste.

Just one of many is the Porcelanosa Bambu Ceramic Wall Tile, which is offered in four classic shades and is part of the Porcelanosa Revestimient Collection. The tiles are a useful 20 x 33.3cm in size, suitable for walls and are recommended for domestic and commercial interior use. The addition of these wall tiles to your bathroom, cloakroom, or en-suite area, or even kitchen, will naturaly blend with today’s modern decor. 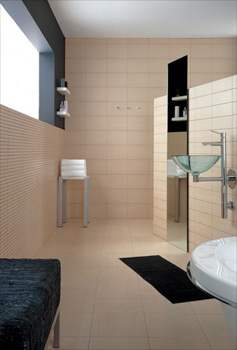 A bathroom facelift will add value to your home

Bathrooms tend to be a sticking point for buyers, if they do not have to hassle themselves with refitting a bathroom which is clearly in need of a facelift, then it’s another plus for your property. So if you’re thinking of adding some saleable value to your home without undertaking extreme construction projects, then spend on a little time on the ‘smallest room’ in your house. If your bathroom is victim to a dated avocado suite or is looking a little drab, a few improvements could add vital selling potential to your home.

Not forgetting, that the bathroom is subjected daily to a lot of household use, this room should definitely not be put on the decorating backburner. Although updating your bathroom is not going to cost the same as a few tins of paint, a few adjustments could really boost the buying potential of your property. The addition of a bathroom suite and perhaps some modern up to date stylish tiling from Villeroy and Bosch can work wonders. 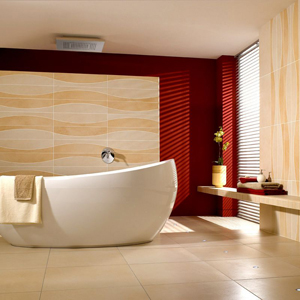 A household bathroom floor will normally take a bit of punishment. It needs to be not just attractive to look at, but also water resistant, hygienic and safe to walk on. That’s why many bathrooms previously carpeted are now being replaced with tiles in many modern households today, but which tiles are the most suitable?

There are a large variety of different tile materials to choose from including ceramic, rubber and vinyl and each material has its own benefits of use. You can also purchase natural stone tiling with a non slip finish which makes them perfect for any bathroom, even if you regularly overfill the bath. Ceramic tiles are a popular favourite among many households and can also be found in a large variety of different colours, textures and patterns. One of the leaders in this field is Porcelanosa and their Turin Wall & Floor Tile, amongst a number that can be found at our web pages. The tiles are available in five attractive colours which are guaranteed to enhance any bathroom area. 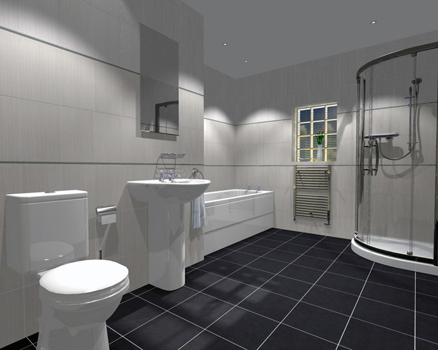 Discreetly positioned border tiles can break up the monotony of a plain tiled bathroom or shower wall and the high quality V&B range will enhance any room and give it a classical look and feel. The feature the motif in relief and have a subtle silk matt finish offering true opulence and minimalist style.

The tiles are manufactured in lightweight material and fitting these will give your bathroom shower or en-suite a touch of opulent times past in the classic baroque period, these are a true clean classic collection that has a finish just tempting you to touch them. Once added to your room, the New Glory border tiles soon display a bold and imaginative touch to your home, which your friends will wish to emulate. 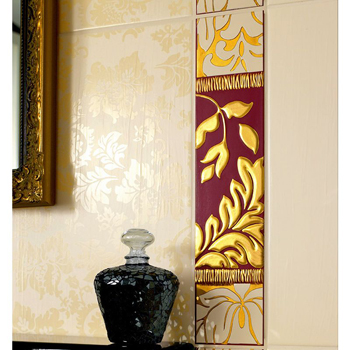 We all are aware that tiling in bathrooms can become rather tired looking and although often it can be spruced up with a shine and polish, with the old grouting raked out and renewed, does it ever regain that just new look? Tiling can make or break a bathroom and the top of the range bathroom suite and shower enclosure might just deserve a five star tiling treatment.

When you begin to look at what is now available in the modern tile range, most of us would like to get away from the “run of the mill” tiles that can be encountered in most bathrooms, which is why choosing from the Villeroy & Boch range will set you apart from your friends and neighbours. Just one example is the Bianco Nero Decor tile which is a stunning decor tile displaying a three-dimensional effect in its design. These distinctive tiles are available in two contrasting colours; black and white and fitting these will completely transform the look of your bathroom or en-suite.

Bathroom being the most visited of the house requires loyal attention. It is not just required to make it attractive to the visitors but also required to create cosy and comfortable bathroom for the family members. Usually, people concentrate on using different type of bathroom accessories but they forget that choosing appropriate tiles from diverse range of bathroom tiles can create stylish and decorative bathroom.

You could be spoilt for choice in your search for these decorative tiles, but Villeroy & Boch have a range of bathroom tiles which we are sure is unsurpassed. Their Bianco Nero Decor Tile 1581 is 30 x 60cm dimension and this spectacular rectangular tile displays a three-dimensional effect in its design, just what you are looking for! 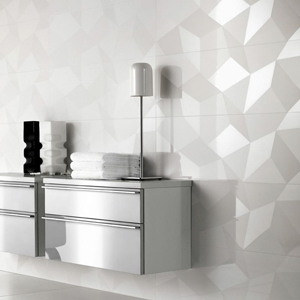